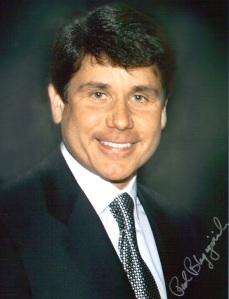 Here’s the criminal complaint against Illinois Gov. Rod Blagojevich, who was arrested along with his chief of staff, John Harris, on Tuesday, Dec. 9.

Blagojevich is accused of soliciting bribes and mail fraud: attempting to “sell” president-elect Barack Obama’s senate seat and seeking to trade state favors in exchange for the dismissal of editorial writers for The Chicago Tribune. But the criminal complaint outlines a broad pattern of “pay-to-play” activity during the governor’s two terms.

U.S. Atty. Patrick Fitzgerald, at a press conference Tuesday in Chicago, said the complaint represents an “appalling statement about what’s been happening in Illinois government.”

“We’re not going to end corruption in Illinois with arrests and indictments alone,” Fitzgerald said. “We need people in the public to stand up and say, ‘Enough!’ ”

Illinoisans elected Blagojevich, a 45-year-old Democratic congressman from Chicago, in November 2002 after enduring years of Republican corruption in Springfield. “It is time, ladies and gentlemen, it is time for a government that’s as good and as honest and as hard-working as the people of this great state,” Blagojevich said, claiming victory.

OLD BLOGS: Egan’s Rats: Notes on a Notorious St. Louis Gang / John and Mack Rust  / Letters from G.I. Bill: He beats the Germans, gets his girl